Most people are aware of the vast computer databases kept by government departments, covert agencies and corporate entities. Many know that DNA databases, retina scans, handprint scans and such are becoming more commonplace. However, few know of the more advanced technologies used to monitor them RIGHT NOW!

Phone tapping, closed circuit monitoring and other security or law enforcement surveillance is not questioned where it is “warranted” (to solve or prevent crime). Nevertheless, covert agencies and their criminal contacts use more sinister and advanced technologies to monitor “others”. Unfortunately those “others” include law enforcers, public figures and those opposing activities like drug trafficking, arms build ups/sales, political manipulation and planetary degradation.

The Problems We All Share
The major concern is the NSA’s global spy system (called Echelon). This system employs computer/satellite technologies so advanced that they can intercept and analyse EVERY phone call, fax, E-mail, telex and computer data message. EVERY SINGLE ONE…WORLDWIDE.

The agency computers can scan ALL satellite, microwave, cellular, and fibre-optic contacts, looking for the key words/phrases contained in their computer “dictionary”. If they find any, the communication is highlighted for agency operatives and you may gain “special attention” (See the next heading).

Notably, Martin Brady, of Australia’s Defence Signals Directorate, has publicly admitted Australia’s role in this monitoring. Technology once used against the Soviets is now used against us, with the sanction of our own governments.

Ask yourself how long international terrorism, crime syndicates and the like would survive if this system were made available to honest law enforcers. Instead, those accessing it (CIA, the Mafia etc.) use it to protect their operations, (such as the drug trade), and spy on their opponents.

Whether they realise it or not, most of these are monitored around the clock on a real time audio/visual basis, courtesy of satellite systems developed by defence contractors in the US. Even handwritten material prepared indoors can be immediately accessed under this system. There is NO PRIVACY.

The Mass Media Role
It’s said “what you don’t know won’t hurt you”. However, if corrupt sections of the mass media are controlled by the Mafia/CIA (and they are) then surveillance results can be “used”; especially if the frequencies of the monitoring signals are made available to the media who can “tune in” using their powerful communications equipment. Public figures can be warned through surfacing scandals. Non-Public figures can receive subtle media feedback; referencing things said or done in private in a “careful” manner. In these ways the mainstream media can oppress political targets. Much of what they gather is never used publicly, only privately. It is this information which gives them much of their power.

Remember that much of what and who we are (and what we believe) is carefully influenced by media presentation/propaganda. To control the population “they” must control the media to some extent. Government secrecy provisions, oaths and sanctions help the common interests of media owners and other controllers are very interesting indeed..

Examples of media suppression, for instance, include the very technologies being discussed here. Firstly, people know there are satellite systems capable of tracking vehicles, which are police “tagged” but they are ignorant of the previously mentioned audio/visual monitoring systems and the systems mentioned in the next section.

Equally, people accept that regulations require them to have certain pets implanted with microchips but they have no idea that the head of NATO’s non-lethal weapons initiative, John Alexander, also wants all humans implanted, at birth.

Those Not Silenced By Special Attention
These are usually people without high profile contacts. They are the ones subjected to remote/experimental technologies like infrasound laser weapons (inducing illnesses/pain via remote satellite), neurophones (delivering verbal, threats, noises etc.), silent subliminals (such as were used on Iraqi troops during the Gulf War) and brain wave scanners (enabling actual mind reading). These are terrible technologies available only to agencies and defence personnel. Their use is a gross violation of human rights.

Many in public life know that there are millions targeted yet they do nothing. Some, like corrupt politicians, journalists and “businessmen”, are complicit; even selecting targets. An exchange of favours if you like.

Example 1. The Neurophone (USPatent 3393279, 1968) This is a device that converts sound to electrical impulses. A directional (satellite) laser or microwave aimed at the body allows a signal to travel the targets nervous system directly to the brain. Only the target hears the voices, sound etc. The CIA and US Military intelligence are the main faciliators of this mode of torture but others do have access to it.

For those aware of this technology (such as ex government agents or knowledgeable whistle blowers) the constant torment of loud threats, noise etc is bearable though very annoying. However, for others it’s a confusing journey towards being discredited and institutionalised. The symptoms mirror those of mental illness and one word to the wrong medico or state police officer and you’re committed. This is their goal. It is called political psychiatry and it’s their favourite method for silencing people who know too much.

How does it work? Well the 3D holographic sound of the neurophone can make the voices appear to be coming from any direction the operator intends. (Remember from the last section that the operative probably has an audio/visual feedback available in real-time). So, some are deceived into believing the sound comes from switched off TV’s or radios. Others hear it as “ghosts” or “voices from God” whilst some have had “encounters with telepathic aliens” or “invisible” agents. Worse still some have had been triggered to commit acts of violence by “Satan” or the “laughter/comments” of strangers around them. More times than not, the victim is sane and these deceptions are AGENCY TRICKS USING NEUROPHONE TECHNOLOGIES. But openly or subliminally applied, assassinations, suicides etc. can be effected by using these technologies on the unwary and susceptible.

In the same manner, visual holograms, blurred vision and so on can be effected using satellite lasers aimed at tracked human targets. Little wonder that this valuable system of oppression and manipulation has been shrouded in secrecy for over forty years, since its invention in 1958. They have ways to quieten opponents aside from using the media and one day these methods may, like the ECHELON system, affect all of us.

Example 2 Brain Wave Scanners (US Government Classified)
These can be hidden in a computer screen or wall, but the most powerful are satellite mounted and can track a target whilst scanning the magnetic field around his/her head.

One use is EEG cloning where the patterns evident when you are angry or sad or fearful etc. can be fed back in an attempt to influence your emotional/psychological state.

Another, more effective and frightening, use of brain wave scanners occurs when EEG results are relayed to US Government facilities where the actual thoughts of the target can be interpreted, instantaneously. This is done by a computer program with a brain wave vocabulary. The program was developed through extensive trials on a group of volunteers (aka the CIA’s LSD experiments decades ago). All the public knows is that stroke victims can think words onto a screen using the thought-activated movement of a computer cursor.

The combined use of brain wave scanning and neurophone technology allows a non-verbal, remote interrogation or torture to be carried out by agency personnel (sitting at a terminal thousands of miles away). Such techniques clearly helped to end the cold war but can the victors be trusted not to use them against their own people. Obviously not. I’m sure their experiments in control are also facilitating advances in artificial intelligence using data gained from “silent” interactions with human minds. I’m equally sure that psychic phenomena and “coincidences” concerning intellectual property can be arranged using brain-scanning technologies.

If computer advancements eventually allow EVERY citizen to be brain wave scanned constantly (like the complete monitoring of the ECHELON communications system) then the “thought policing” of the New World Order will make life unbelievably oppressive and anything but democratic. Even with the progressive monitoring system now in place, those most likely to interfere with criminals are easily tagged. Imagine if thoughts themselves are suppressed. Censorship could take place at the ideas stage; before writing, submission etc. Credit for ideas, inventions and strategies would always go to one of “their” people. Only those “in” with them would profit, only those who questioned nothing would escape scrutiny. And no military or federal law enforcement agency would assist; for political reasons.

Because politicians are our elected representatives only they can (ultimately) help. Nevertheless, they will not do so without prompting. The media/Mafia/CIA connection can ruin anyone’s career just as, in fact, it made many of them in the first place. It’s an unpleasant truth but ignoring it won’t change it. Many in public life simply cannot be trusted.

Therefore, I urge the readers of this article to make contact with the representatives of humanitarian organisations and ask them to pressure governments to act. For instance, Amnesty International, The International Red Cross and the UN should all help. The first two should expand their mandates and policies to enable them to oppose those responsible for the relevant human rights abuses. The UN needs to establish a Satellite committee and allow weapons inspectors to inspect NASA (et al) payloads for non-lethal weaponry such as neurophones and brain wave scanners.

This article contains a clear warning. Please don’t ignore it. 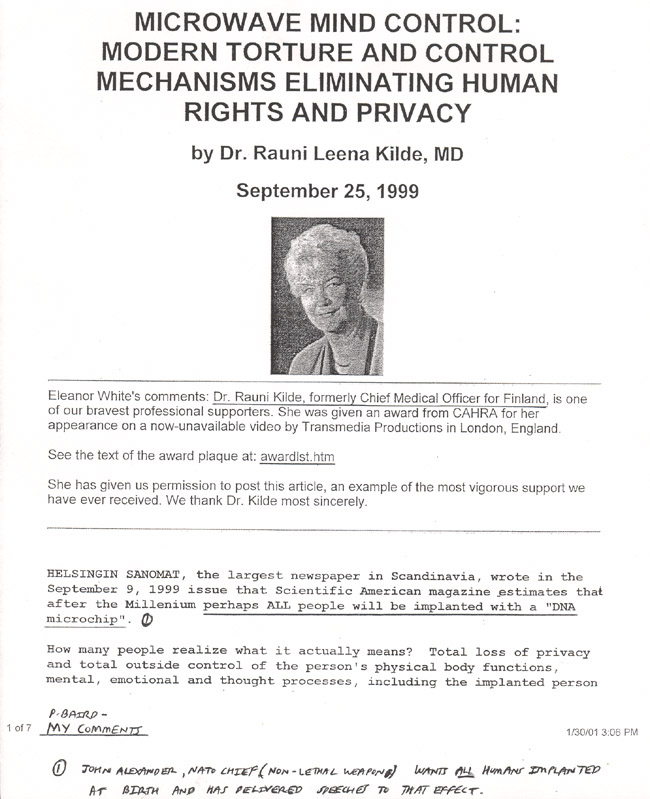 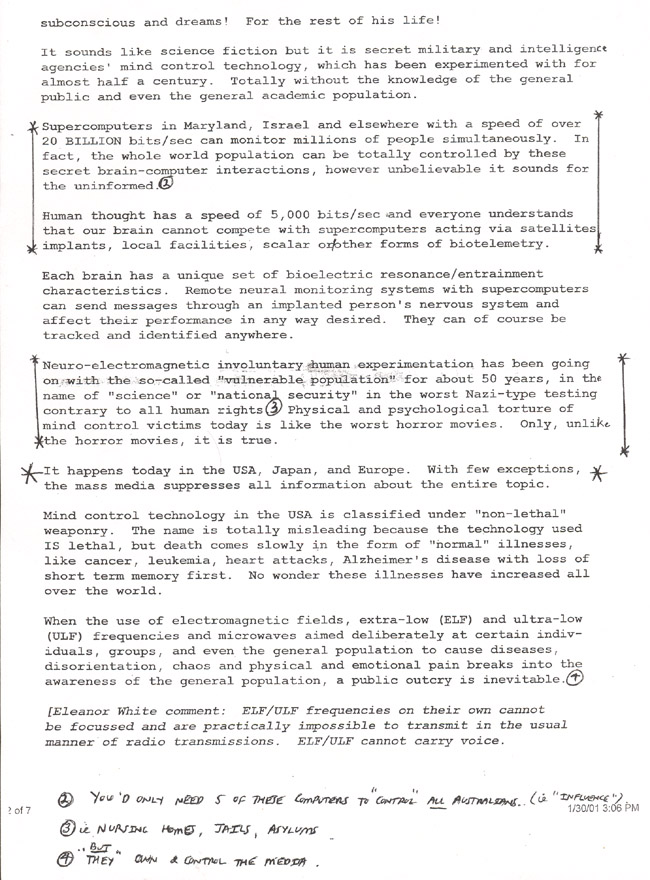 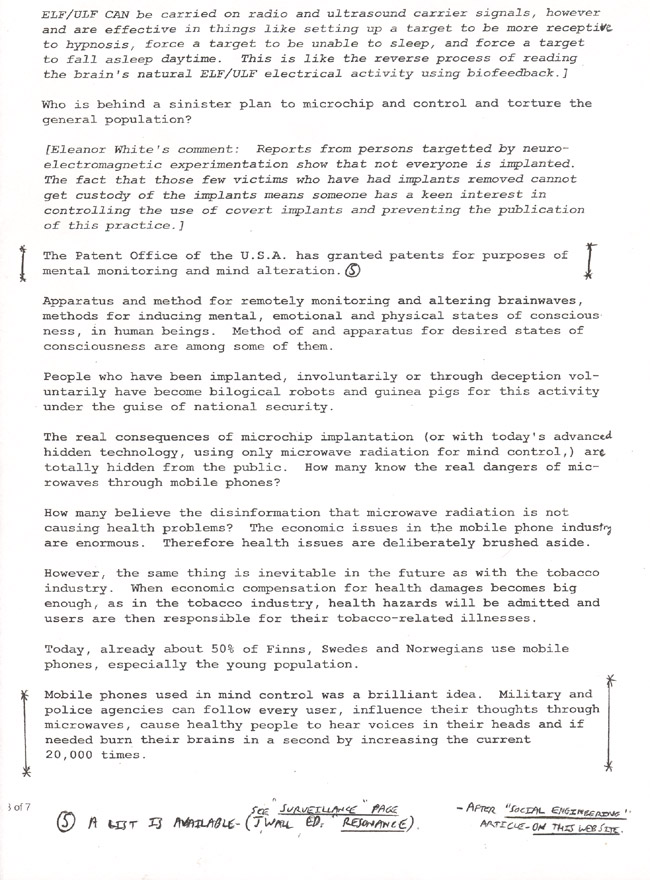 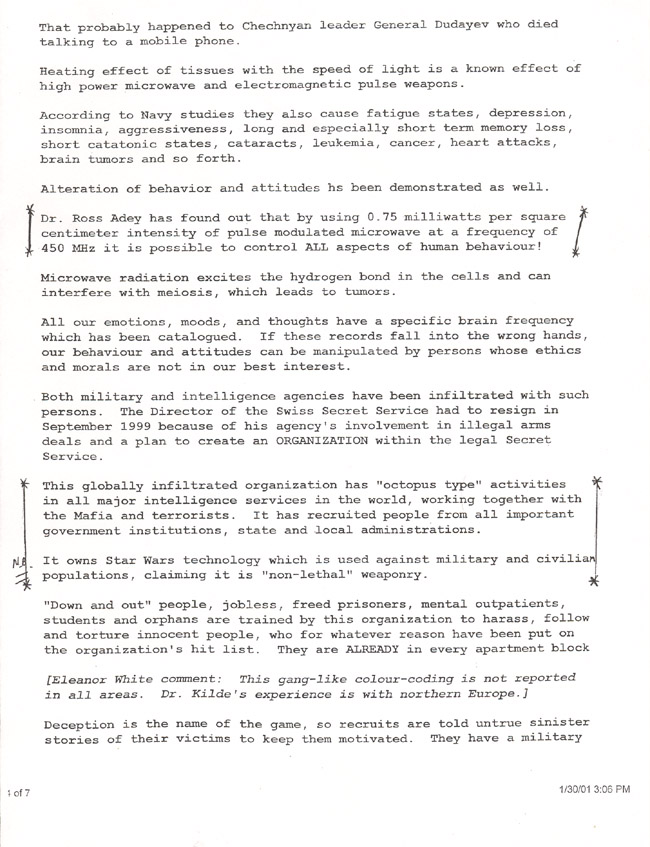 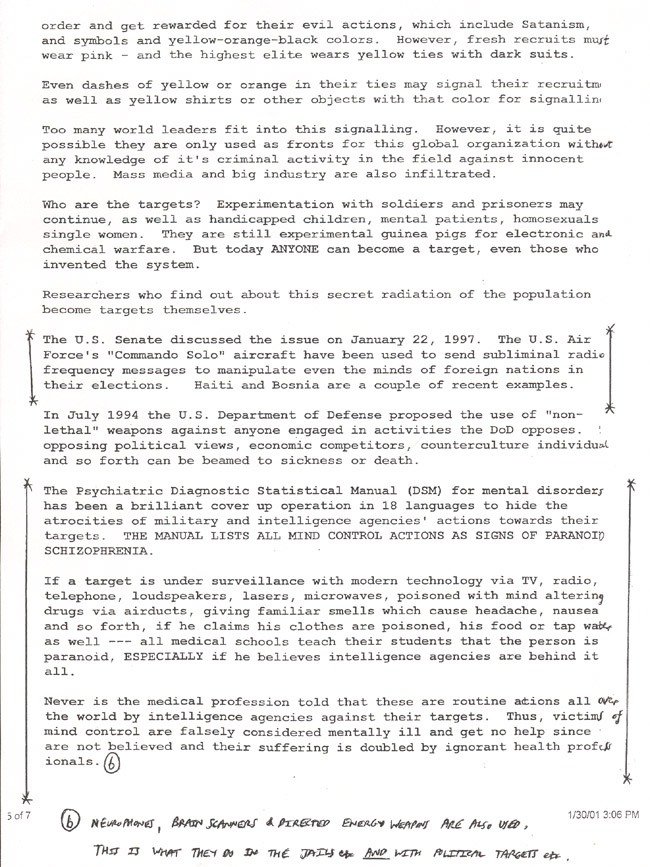 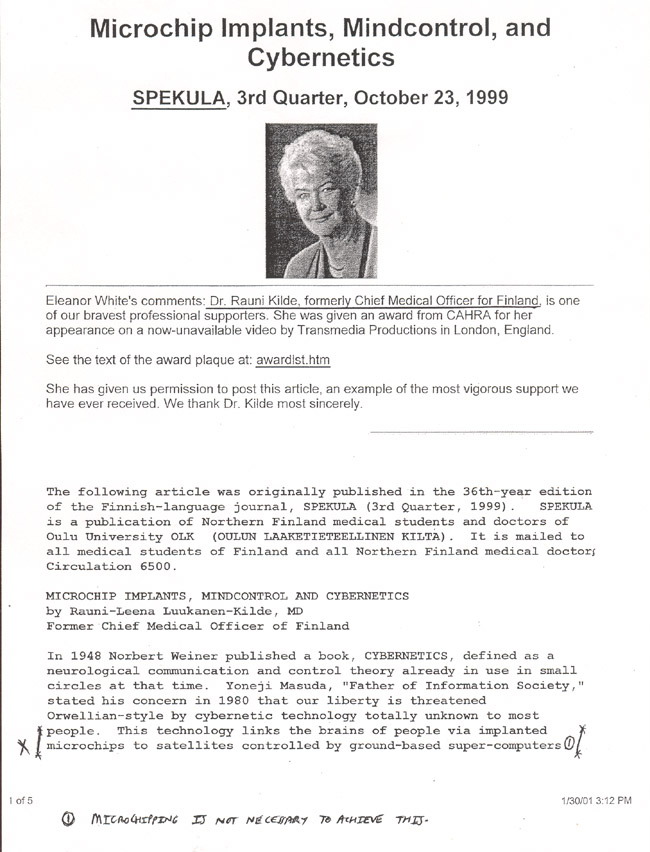 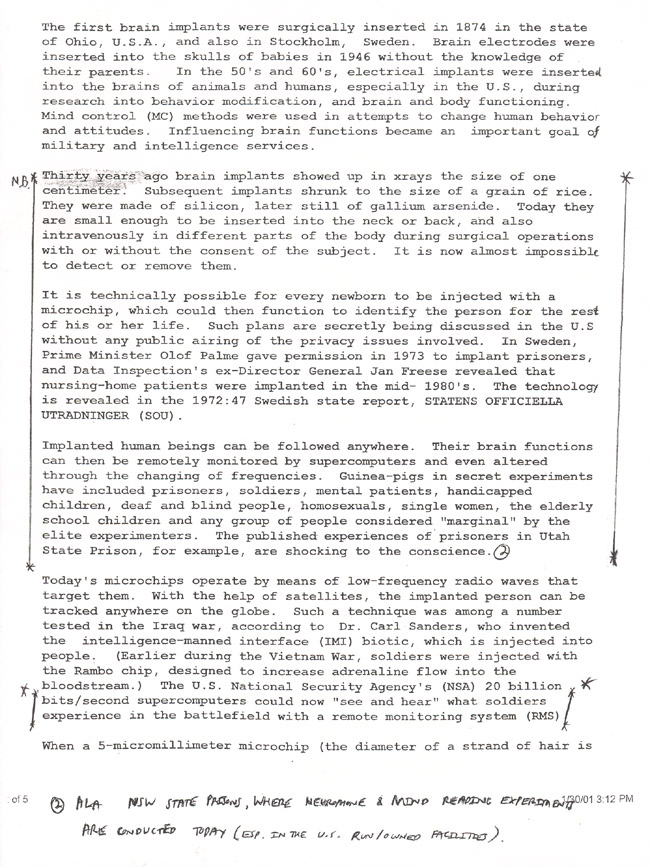 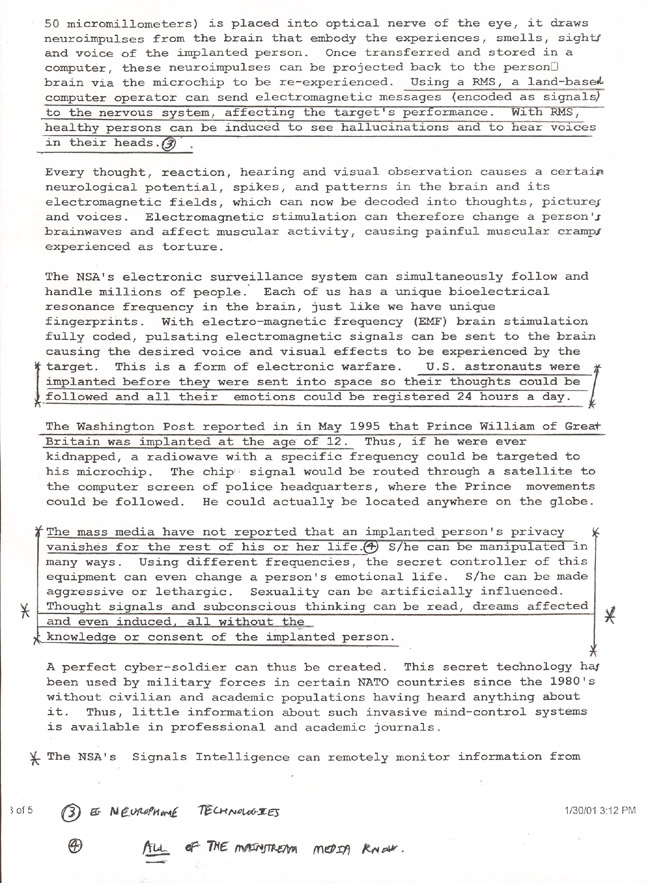 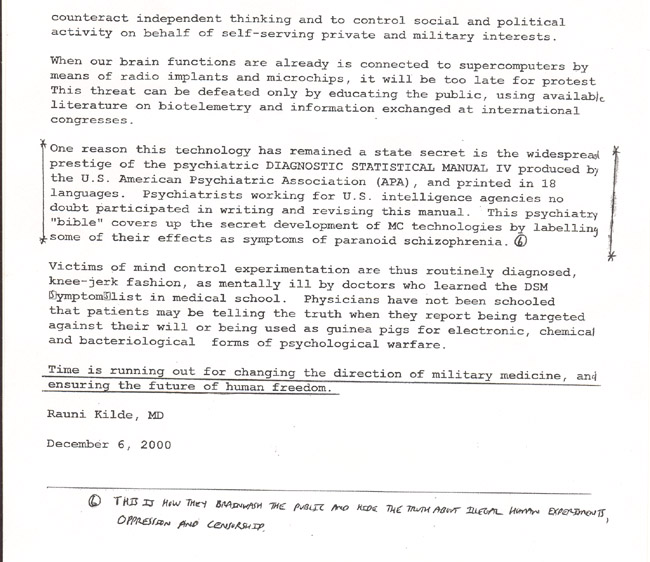